Death is coming. August 21st specifically. So make sure you’ve made all the arrangements, because Vigil’s eagerly-awaited sequel is going to demand your presence, no questions asked. As protagonists go, brother number two of the Four Horsemen of the Apocalypse is certainly someone you don’t want to piss off.

My hands-on session starts at the opening of the now-finished game. A noisy Manchester Comic Con environment made taking note of any cutscenes a redundant luxury. So, eager to savour the full experience come review day, I skipped ahead, keen to let Death to do his thing.

Gameplay begins with Death riding his steed through a barren frozen world. While free to use his scythe on horseback, there was nothing to kill at this stage. After a short ride I had to dismount to complete a tutorial covering the basics of movement and combat.

Climbing sections will remind gamers of Prince of Persia and the like. Death climbs and wall-runs with the best of them, moving at a fantastic speed that feels great if you ever get impatient climbing across wide areas in a game. Sure, it looks almost freakishly fast but I’m one of those impatient players, so all is good, especially as I was itching to get Death’s blades wet. Sometimes I struggled to swing the camera round to see where I was meant to be jumping; often leading to a poorly rewarded leap of faith. Close restart points made this a forgivable inconvenience though.

Graphically there wasn’t much to get excited about during these early stages as the colour-scheme consisted of shades of grey and blue due to the icy setting. Thankfully, having already seen previous footage we know that there are more eye-catching environments ahead. Character design is certainly of an immediate high standard though as Death and the NPCs are all well-detailed during cutscenes.

Usually, I’d go straight into details about the combat next, but today it’s all about the loot. The addition of loot to the series is a great move that will lengthen the experience and add some variety too. Items dropped from enemies or found in chests are randomised, meaning every player could have a different experience.

Loot takes the form of anything from weaponry to armour. When you stand over a piece, a pop-up box gives you a few essential figures, stating whether it is stronger/weaker than your currently equipped item. Holding the Select button allows you to equip it instantly, or you can just chuck it into your inventory. Being able to equip items without diving into menus makes things much easier and keeps you involved in the game. Although, you’re free to do so if you wish to study the intricate pros and cons of each item. It’s a good balance.

The Square and Triangle buttons can be used to attack with primary and secondary weapons respectively. Dual-wielded scythes are Death’s first primary weapon. Fast and suited to his acrobatic style, scythe combat allows him to perform a violent dance as he rips through enemies with whirling attacks. Secondary weapons I found during my playthrough of this stage consisted of axes and hammers. These massive two handed weapons are slower than Death’s primary blades but much more powerful. The hammer can be used to smash downwards or sideways in lumbering but crushing effective blows. The axe works in a similar way, but marginally faster, which makes all the difference if you don’t want enemies to interrupt your attacks. You can’t get out of the longer attack animations of the secondary weapons, which adds a small degree of risk/reward and stops you becoming too dependent on the most powerful attacks.

The fast primary and slow secondary attacks didn’t quite gel together as smoothly as I would like, but there were glimpses of potential, with different combos appearing when I’d try and go between the two. I had to remind myself that I was playing the opening stages of the game though. There will be a hell of a lot more to see in the combat as I can look forward to picking up weapons with unique attributes that will have a direct affect on combat. Levelling up will also play a bigger part than the original game. 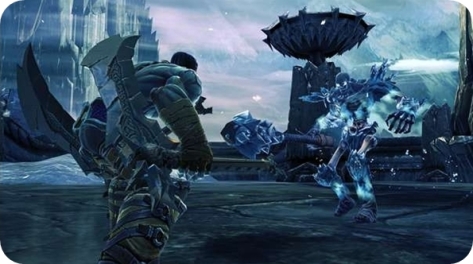 Two skill trees will affect how the game will play out for each player. The Harbinger and Necromancer trees cater for two different styles of play. Harbinger is for players eager to get up close and personal with brutal melee attacks, while Necromancer provides a more magic-focused skillset. Don’t worry about choosing one or the other as you can dip Death’s bony toes in both. I’ve been assured that you won’t be able to max-out both trees in a single playthrough. That’s what the New Game+ endgame will be for as you start again with upgrades carrying over.

Enemies taken on during this brief playthrough were all ice-based. General scythe-fodder minions burst from frozen tombs to block the path, attacking in groups, which is no problem with the ever-agile Death’s dodging skills. Taking on a large troll-like creature proved a sterner challenge and despite the presence of a large health bar I’m told that this isn’t even a sub-boss.  Expect big things from sub and full-on bosses then. Although, I hope to see more attack variation than ground-pounds and charging, the weary bane of almost every action game on the planet.

Going back to the exciting prospects of loot, Vigil have found a good way to make even unwanted items important. In addition to selling them for coinage you can ‘feed’ them to certain weapons. These super rare ‘possessed weapons’ will appear at random during the game, highlighted in red so you don’t miss them. You might get one in the first thirty minutes or you could be waiting for hours. By feeding them other items found on your travels they will level up and become stronger. The more powerful items you feed it, the better. Hopefully I’ll be picking some up early on as this sounds like a lot of fun.

With the slim summer pickings to choose from, Darksiders II might just be the strongest title on the horizon before the over-crowded Christmas release schedule. The promise of loot, expansive combat options and a larger world to explore that isn’t limited to the constraints of an earth-setting mean that this sequel should easily surpass the impressive original.