Even Batman needs a little help from his friends, despite hating them all.

If going on a mad collecting splurge in Lego Harry Potter Years 5-7 was too much of a guilty pleasure to indulge in, you might be more comfortable with Lego Batman 2: DC Super Heroes. Even in Lego form, comic/movie icons don’t come much cooler than the Dark Knight. Even if he is stubby and spends most of the time sulking.

As long as you’re not expecting any dark plot elements like Nolan’s films, the 90s animated series or Rocksteady’s recent games, you’ll be fine. This is for fans who don’t mind a bit of fun poked at Batman. If the Joker was going to make a Batman game it might be like this. Everyone is so happy and cheerful, except for Batman of course. 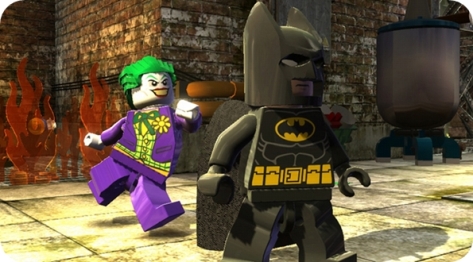 For the first time in the Lego series, real voices are used instead of vague murmuring. This allows the game to have a decent story as it doesn’t need to rely on us already knowing the plot as with the Star Wars, Indiana Jones and Harry Potter titles. There isn’t too much chit-chat; the news reporter introducing each level has more lines than anyone. But Traveller’s Tales have shown that they can write funny dialogue as well as physical comedy. The way that Batman can’t stand Superman is great to listen to throughout, especially as Robin is such a fanboy of the Red Blue Blur. Hearing Superman say “Cheer up, Sourpuss,” to Batman is pretty much the best thing I’ve heard in a game too.

Gameplay hasn’t really changed over the previous Lego games. Batman and Robin fight their way through various gangs of goons before getting on with the puzzling. The puzzles usually involve platforming, switches and bashing anything destructible to pieces hoping it will reveal some building items. Destroying everything insight will reward you in studs (coins) so you’ll find yourself bashing everything like a Tasmanian magpie.

For the most part you’ll be swapping between Batman and Robin, with Superman also getting a decent amount of air time. That’s right; you’ll be able to fly as the Man of Steel. Flight controls are basic and a little awkward for tighter indoor spaces, but it certainly makes reaching some areas a doddle. When used in the open world parts of the game though the controls change and simply flying up in a straight line requires some awkward analogue controls.

Thankfully, Superman does come equipped with a wide range of familiar and useful skills. Ice breath can put out fires, heat vision can be used to attack enemies, cut out shapes or destroy gold items. X-ray vision is useful for seeing through surfaces and picking the locks of large doors. The Dynamic Duo are without super-powers, but very capable in a scrap and can use batarangs to hit multiple enemies thanks to a reliable lock-on system. A grapple gun helps them get around too. 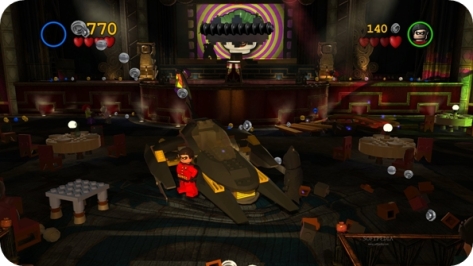 Specific suits are what give them the equivalent of superpowers though and they add some welcome variety to gameplay. Batman has one for turning invisible and giving him x-ray vision, another for laying bombs and extra strength, and another allowing him to glide and use a sonic gun to break glass barriers. Robin has an acrobat outfit that gives him a Bo staff for combat and also sticking into specific slots to swing along the walls. His hazard suit can be used to walk through chemical spillages and absorb water to clean them up allowing safe passage for Batman. These and more suits are used throughout and are especially handy for exploring the city between missions for collectables.

Vehicles make a welcome appearance in the game (hint hint Rocksteady Studios). The handling could be better for the Batmobile and the brief forklift section almost drove me to the edge (via clipping every wall and object possible). Flying the Batwing or helicopters (enjoy Robin’s rainbow paintjob) are ok for navigating the city while avoiding traffic on your way to the next mission, but most dedicated vehicle stages, turn into on-rails turret sections. I didn’t mind this at all as the shootouts provided a welcome change of gameplay styles from the relentlessly compulsive Lego smashing. 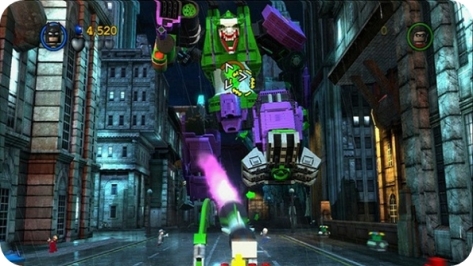 The story is based in Gotham and Metropolis with Lex Luthor and Joker teaming up to cause trouble. To be honest, the DC Super Heroes part of the title is a little misleading. There are very few appearances from other DC characters. The villains are mainly optional side-quests to bung back behind the walls of Arkham Asylum, which still manages to look creepy despite being made of Lego. The DC Heroes make a very late appearance as fellow playable characters which left me feeling a little cheated to be honest. Admittedly, once the game has been completed there are plenty of items to go back for, some of which are only accessible with certain characters. Although if you’re going to compare this game to the last Lego Harry Potter game, it feels like there are less items to collect, making the game feel much shorter. The main campaign only lasted around eight hours and would have been even shorter had I not been aiming to get the coin target for each stage.

Chances are though, that you’ll be firing the game up again as soon as the end credits have rolled, so typically obsessive is the compulsive item hoarding. The open world cities can be scanned in the map screen to look for special items, citizens in peril and escaped villains to kick off your lists as you make your way towards an easy Platinum Trophy or 1000 Gamerscore Points. 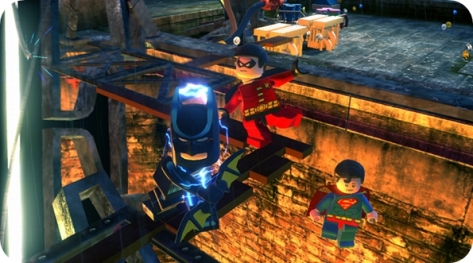 Presentation 79%: Graphics are sharp and the darker look of the game has been maintained, with Gotham City looking very impressive. Voice acting adds some maturity to the series that will hopefully stick as the trademark humour makes the transition very well.

Gameplay 68%: Tweaks to gameplay are more on show here than any signs of true innovation for the series. Most puzzles are very easy but there’s the odd head-scratcher in there too. Infinite health once again removes any challenge, but also any the frustration. It’s just fun to play.

Single Player 70%: Relaxing and simple gameplay throughout, with a cool range of DC locations to explore. A short campaign is offset by the extra hours you’ll get if you absolutely must collect everything. And you will.

Multiplayer 70%: Split-screen gameplay returns as does the clever dynamic diagonal split, allowing each player to do as they please. Competing for scores is always competitive, friendly fun too. It might be time for Traveller’s Tales to include online play soon though.

Performance 71%: There’s a long pause while the game autosaves after picking up collectables, which makes exploring a real pain sometimes. No other issues to report.

The simple gameplay manages to be fun despite offering little challenge other than hunting down all the hidden items; and the welcome inclusion of an open-world map extends the game beyond the usual level replays. The high production values really help it stand out from the crowd too, although we’ve come to expect that from the Traveller’s Tales studio.