Take me down to Arkham City, where the grass is dead and the girls show no pity.

It’s encouraging to see some premium downloadable content that attempts to expand on the single-player experience of a game. Like many games, Batman: Arkham City has seen more than its fair share of extra costumes and challenges for characters like Robin, Catwoman and Nightwing. But after the huge events at the end of Arkham City, fans will be excited to jump over the prison wall again to ruff up the inmates. As a warning, this DLC review contains spoilers for the end of the main game, so consider yourselves warned.

We begin the game as Robin, looking for Batman after he disappeared a few days ago. Bats went looking for some kidnapped cops and never came out. The Joker’s adoring follower, Harley Quinn is really losing it after his death and has taken over his steel works hideout. She’s even got a gang of goons, all kitted out in red and black to fit in with her style. Following a relatively tiny role in the main game, it’s good to see such an entertaining character get a better share of the limelight. After getting smashed down after playfully cart wheeling towards Batman in the church back in October, it comes as no surprise that she’s playing for keeps this time around.

After Robin’s intro, we get to play as Batman in the events leading up to his disappearance. For the most part though, this is Robin’s game. Chances are quite a few of you groaned then and fair enough, Robin is a complete tool. But let’s take a look at what he brings to the game. His fighting retains the same; attack/dodge/counter style that makes Rocksteady’s Batman feel so satisfyingly intense in combat. Robin being a bit soft requires him to use a Bo staff to take on enemies rather rely on unarmed skills like Batman and Catwoman. He does have a few cool takedown moves though, especially the double takedown on unsuspecting pairs. His single silent takedowns, choking thugs out on top of his back, takes a bit too long though and sometimes results in getting spotted.

As far as gadgets go, you can tell Bruce and Alfred just supply him with the leftovers. Sure he’s tried to make up for it with a zip kick move that attaches the horizontal grapple to an enemy so he can launch himself at them for a powerful kick, but when you look at the contents of his belt compared to Batman’s you feel a bit cheated. He has laughably-shaped shurikens instead of batarangs, explosive gel and smoke pellets. 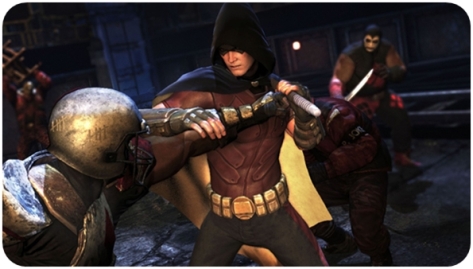 A few new items are available to him though. Snap Flash sticky bombs are awkward to aim and detonate in a scrap, but are handy to put on moving objects and blow-up as they near an enemy. The staff can also turn into a bullet shield which is handy for getting past turrets and steam vents and getting closer to enemies with guns before bashing them with it for good measure. Using it to get past steam vents can be a bit awkward as it’s difficult to strafe sideways, meaning you’ll often burn his arms and send him reeling.

The missions in the game are simple fetch quests, disarming bombs or using detective mode to follow blood stains. The latter of which is quite a trek outdoors, requiring a careful eye to look out for armed goons, especially snipers. The gameplay is as balanced as ever, with stealth being more satisfying, but you can usually fight your way out of trouble if you get caught out.

This DLC chapter is a standalone item from the main story and as such is selected from the main menu. So you don’t have access to the whole city and when playing as Batman you can’t resume any Riddler challenges and so on. The only side-mission available is popping the 30 red balloons hidden throughout the chapter. Thankfully the ones you find stay found when you replay the DLC.

You may be tempted to replay it for that task as soon as you finish too, mainly in an effort to get your money’s worth. There are certainly examples of some alarmingly priced DLC out there -usually FPS map packs-, but even at $9.99 USD/£6.49/800 MSP, this feels a bit light as the chapter can be finished in two to three hours.

There’s one fight that prolongs the experience against a large number of enemies including a titan, shooters, knifers and riot shield goons. Having not played the main game since release, it was initially a jarring experience taking on the tougher enemies until I got my groove back. It doesn’t help that Robin’s style seems weak and sluggish compared to Bats and Cats.

The missions themselves may be somewhat lacking in originality, but I really admired Rocksteady’s efforts to record some new dialogue. Every time I’d stalk my way towards a group of guards, they’d be taking about the Joker’s demise or Quinn and I found myself always letting them finish their chat, absorbing the atmosphere, before smashing Robin’s Bo staff into their necks.

Harley Quinn is on scintillating form once again. Listening to her berate guards or lament the loss of her Mr. J can be very amusing and touchingly sad in equal measure. During these events we hear Robin and Oracle talking about how even Batman hasn’t been the same since the Joker’s death. It would seem that the loss of Talia and his greatest enemy has unhinged something inside as he remains distant throughout.

Unfortunately, this tantalising aspect of the story is never really touched upon and by the end of this DLC chapter, you feel more like you’ve played an early chapter of Arkham 3, rather than a piece looking to give you any solid closure as more questions are asked than answered.

Presentation: 75 % Atmospheric interiors draped in dedications to Mr. J are amongst the only changes from the main game. Sharp visuals except for some minor texture pop-in on Robin during dialogue scenes.

Gameplay: 65 % Nothing new, but the missions will be welcome if you’ve not played the original for a while. Despite making a good effort at imitating the near-flawless combat style of Batman, Robin puts in an average side-kick performance.

Single Player 60 % What is here is certainly enjoyable for series fans, but clocking in at 2-3 hours is undeniably disappointing.

Far too short is the lasting impression I had when the end credits burst onto my screen after enjoying most of the action thus far. Robin scores a few minor points for not wearing his old outfit and not talking too much, but returning to Arkham City as Batman or Catwoman would have been much better. If the story elements that remain unanswered are going to be further explored in Arkham 3 (or further DLC?), then Rocksteady have certainly got my attention again.