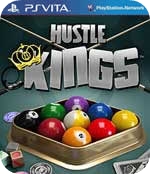 A cheap price and pool on the go are certainly good ingredients for the Vita’s take on our favourite pub game. No arguments over whose 50p is on the table at 3am either, which is always a good thing.

A very long tutorial begins well enough by telling you how to use the three different cue shot methods and spin shots. But the help and controls for jump shots and straight backspin are terrible and anyone who can do these shots in real life will no doubt be shouting “Bullshit!” many times over.

Hustle Kings likes to think that it’s cool, but the way jump shots are handled makes it look like a punk. You have to switch to ball-cam mode to see the trajectory of the ball, but you can’t tweak the aim from there, making it a long back and forth effort, only to fuck it up anyway. It should have been a fun part of the game, but you’ll learn to use the cushions instead. 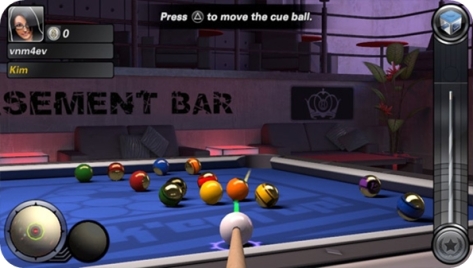 The game uses touchscreen and analogue controls for various elements, but the cue shots themselves force you to use the screen. Looking around the table and aiming can be done with either, but I found the analogue controls to be more reliable.

All the various pool variations can be played in exhibition matches or you can dive into the career mode. When playing the more unusual match types for the first time the game does a poor job of explaining the rules. You’ll just have to have a few foul shots called against you before you realise what’s going on. The further you go into the career mode, the harder it gets, not just because of the AI but your aiming indicator lines get shorter and you’re forced to use the different cue shot methods which is a shame as some of them are rubbish.

The first is the simplest; just pull back the cue icon for how much power you want. The middle method lets you set the power manually before pulling back the cue, but the screen press required to confirm the power is unbelievably unresponsive, like unplayably unresponsive. The final method is pretty much manual all the way.

Three viewpoints are selectable with a tap of the shoulder button. None of them really nail an authentic angle, with the default one being far too low. I favoured the overhead shot as it showed the direction of the balls and impact angles better than the others. The ball-cam is only something you’ll use for jump shot attempts. Annoyingly the game won’t revert back to the last camera used each time, making the shot process even longer than it needs to be. This is exasperatingly annoying in games where you’re racing against the clock.

For the most part, the aiming and impact lines are reliable, but you will certainly be screwed over a few times, a real-life inclusion that nobody would have missed. The AI opponents have no distinct characteristics, but are more than capable of cleaning you out after the early numpties have been passed.

An in-game currency is earned throughout, with extra dough available for trick shots when the game decides to recognise them, but to be honest there’s nothing of any interest available to buy with your rewards. Alarmingly, the special cue chalk that acts as a booster for specific skill shots has to be bought with REAL money on the PSN. Balls to that.

Online matches complete with handy text chat functions extend the life of the game if you’ve got the skills, but if you think waiting for someone at your local pub to line up a shot is annoying, doing it over the internet might put you into a coma. Saying that, pulling off an amazing shot offline is like doing one at the pub when your friend isn’t looking.

The Short Version: With a so-so career mode and lengthy shot process this isn’t the best game for quick thrills, but pool fans might get more out of it if they’re happy to take it slow. Most controls elements work, but there are enough dodgy areas to put a level-cap on your fun. Overall though, at only £6.49 it’s cheaper than a couple of pints and a game of the real thing, so definitely worth a gamble.