Regretting not finishing Final Fantasy XIII? Well that probably depends on whether you managed to forgive the linearity and heavily automated combat to push on and finish, or on how adept you are at finding HD cutscene compilations on torrent sites to enjoy what was a cracking story along with some generation-leading CGI.

Either way you better get cracking because there’s every chance that you’ll want to return to Cocoon and Gran Pulse next year with this sequel. Don’t worry about your FFX-2 flashbacks; no Dresspheres have been sighted, yet.

Our demo began at the start of Episode 2, dropping the party into a section of a city in somewhere on Cocoon. There’s little in the way of scene setting, but they appear from a portal and seem surprised to be on Cocoon. The rather small party consists of Serah -sister of the moody, alluring and enigmatic Lightning- and new boy Noel, who looks like an older version of Sora from theKingdom Hearts series. He’s all spiky hair and brightly coloured JRPG clothes from the genero-character 3000 distributor. Sadly, there’s no appearance from the other XIII members today. We’re not sure what Snow will think about Serah hanging around with…this guy. To be honest, he’s not that annoying, not compared to that Hope brat.

Final Fantasy fans, well the girls at least, prepare to squeal with delight (although if any of you do it down my ear again at an Expo, shit will go down), as the Moogles are back and one of them is a member of your party, Kupo. This flying cat/bear/toy abomination flies around with your party and can be used to scan areas for hidden items with a push of R2. This scan will also initiate combat with any nearby hidden enemies.

There are lots of locals to chat too, but no shops today. Everyone seems a bit preoccupied with the massive giant that smites anyone who goes near him thinking of bagging a mighty haul of XP.

The action kick off with you first encounter against the recurring boss, which at first appears to be a giant floating hand, until the full Atlas monster is revealed. Initially, the combat is very similar to XIII(groan). Admittedly, the combat wasn’t as much of an issue to some as the blatant linearity of that game. I was dismayed to see the return of the bastard Stagger bar though, where you have to fill it up (while it depletes over time) to temporarily break an enemy’s armour and whale in with the attacks. So yes, the Paradigm class changes are still there too. Unfortunately, no editing of these (or any stats screens for that matter) was available in the demo. 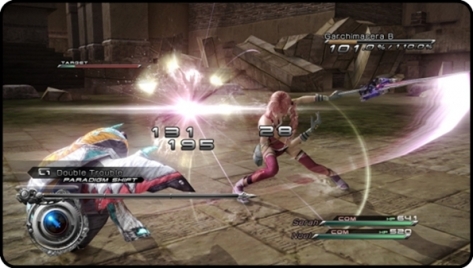 An example of the overly simple nature of the auto-combat was all too apparent when I was able to start taking notes on my phone with one hand while hitting X with the other. Any experimentation of picking your moves at this stage was pointless; the auto-battle button dominated again. Another downside was that I was only able to control the moves of Noel, a swordsman with similar moves to Lightning, but without magic. Meanwhile Serah is showing off her new jewel-encrusted mega bow and using fire spells, without a care for your input.

However, there are a few new moves in this sequel’s bag of tricks. At the start of random encounters, you’re given a chance to perform a pre-emptive strike. While still in control of movement, you can run over to a nearby enemy and get the first attack free of charge before the turn-based battle begins.

There’s more, in a very western move (see also Ninja Gaiden 3), the battles have adopted Cinematic Actions (aka Quick Time Events) with button presses and analogue twitches. Far from being a negative point, they add some cutscene-esque quality to the action. More importantly, they really battered the Stagger bar of the recurring boss.

When some smaller enemies are defeated, they leave behind a crystal, allowing Serah and the Moogle to bring them on board. For the demo, we were given a Flambero (orange blob thing) and a Chocobo. Different Paradigms will select different recruits from your collection and they’ll automatically attack your enemies. They even build up a special attack, to be activated with Square when you need it. The Flambero has a rapid punching attack, while the Chocobo attacks with its claws. Neither of them did massive damage, but having an extra team member to distract the enemy is no bad thing.

The level on show today was a good length, clocking in around 20 minutes. Fighting through robots, large blue wasps and something with a cute face that we had to stab, we eventually arrived at the objective marker to find the same boss that began the level. It wiped us all out in one go. Following a futile second attempt, a little planning was required. Checking the map revealed another objective marker down a metallic tunnel. After fighting our way through it we came to a room with some floating crystals that, when unlocked, would help us against the Atlas boss.

To unlock them Noel is thrown into a minigame where he must cross a grid, collecting all the crystals on the way to the exit. The challenge being he’s not able to stand on any tile more than once. After clearing a few of these fiendish rooms, we made our way back to the boss with renewed confidence.

Atlas was now sluggish and weakened and we eventually managed to defeat him. Sudden QTEs helped with the stagger bar and with a careful eye on Potion distribution, we didn’t have any issues taking him down. In another improvement over XIII, if your party leader is killed it won’t result in a Game Over screen. Square-Enix have been listening to your feedback.

While not a massive departure to XIII, we are seeing early signs that the developers are making an effort to improve the combat, and the side-routes with extra items to find are a welcome sight on the map screen instead of simple A-B routes. We can’t wait to see the side-missions and the improved customisation of the party’s skills and abilities too. Gran Pulse and Cocoon are back on our holiday destinations list for 2012.