Since Saints Row 2 surprised us all by being a hell of a lot better than the original and for many, a more enjoyable game than GTAIV, we’ve been waiting to see how the next game would handle the pressure. Well, just remember it was a bit bonkers before and it’s not prepared to put its pants back on quite yet.

With just one hour to play the new game, we couldn’t believe how quickly it went. The first part of the demo is a bank heist with your Saints Row buddies, and all of you are disguised in oversized Johnny Gat heads, including Gat himself. It would appear that the Saints might have chosen the wrong bank to knock over though. As soon as they let their guards downs, all the bank tellers pull out some serious military grade hardware and open fire.

So begins the first stage of the game, with you suddenly being very outnumbered. There’s no cover system other than the duck button, but the gunplay is solid enough to just get on with it without cowering behind a desk. Enemies appear in large numbers, but go down easily. It’s fast, fun and just the way we like it. The wonderful people-throwing option returns once again, should you want to defenestrate any bankers. 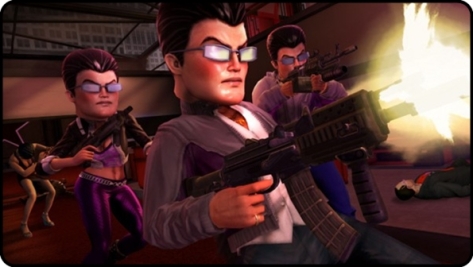 After reaching the vault on the top floor, the Saints find it locked (no shit right?). Rather than waste time with drills and hiring Jason Statham, they blow a hole in the roof of the building and get a helicopter to extract it. Inexplicably your character decides not to escape with the others but to ride along on top of the safe, while the chopper tries to escape. For some reason the pilot hovers around the bank for ages while you shoot down dozens of SWAT officers pouring onto the roof. It’s almost as if the pilot knows you want to stick around and have some more fun, because it was a bit too easy so far.

After this mission, we had a play with the character creation tool, which is staggeringly deep. Players of SR2 will know that this comes into great effect as you see you own babe/hunk/freak in the cutscenes. You can make them black, white, blue, red, green and everything in between and play around with hairstyles, voices, gestures, body sizes, facial features and even a sex appeal slider that fills out various bulges and bumps. If you just smirked, you’ll find plenty to enjoy here.

After the avatar creation we’re let loose on one of the smaller islands of the city to run around as we please. Here we were free to explore the various challenges, shops and issue few bullet-spewing greetings to the local gangs and police. 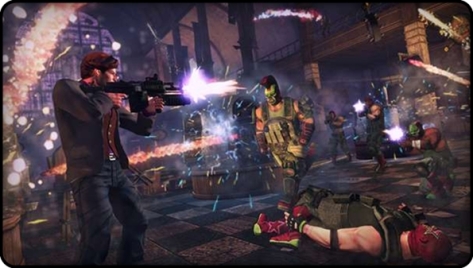 One of the newer challenges is the score based Professor Genki’s Super Ethical Reality Climax arena events. You travel through various large rooms taking out gun-wielding lunatics in animal costumes. To pass the event you need to reach a score target by hitting cash signs, racking up kill combos and adding a bit of style with headshots or chucking enemies into electrical barriers. It’s quite tough, especially considering this was an early level, but it’s undoubtedly fun, especially if you enjoyed games like The Club.

Other challenges available during our demo were familiar ones. Insurance Fraud has you jumping in front of traffic trying to injure yourself as much as possible and Mayhem events are a test of how much destruction can you cause with weapons and vehicles. Clearing an area of a rival gang members returns once again too, interestingly they have multiple stages of hostility, similar to the police, as we saw Luchadores Gang trucks pull up and unleash a cluster of explosives before they’d get out to attack you. Admittedly there’s nothing ground-breakingly new with the challenges so far, but we’re promised a few new ones by the time the game ships.

In addition to the strong amount of challenges, the map is packed with stores to splash your dubiously earned cash. Weapons, cars (plus modifications) and clothes are all there. The Saint’s gang are so famous after the events of the previous games they even have their own store selling high-end bling for rich corporate types who think they’re a bit gangsta. 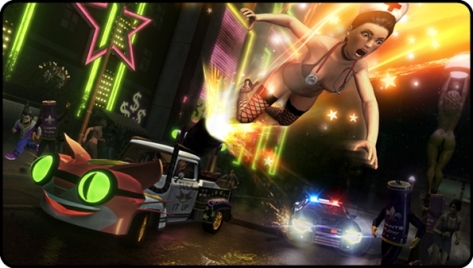 The majority of your money will be spent on the long list of upgrades for yourself, your gang, vehicles and your hideout. Bigger health bars, fire resistance, quicker cooldown for other gangs wanting you dead and other useful stat boosts will allow you to have even more fun without having to worry about the consequences from vengeful rival gangs or police. ‘Respect’ is earned for completing missions and generally behaving like a complete bastard to everyone and everything, this in turn levels you up and unlocks new groups of upgrades for you to purchase separately, so at least the game world’s many distractions will help you become stronger.

We were given a wide range of weapons to try out, from standard pistols, assault rifles, shotguns, to the more bizarre giant ‘pleasure instrument’ as pictured below. Or how about a launcher that fires a small octopus that sits on people’s heads and sends them into a trippy trance while attacking your enemies? Better of all is the laser-designated airstrikes for a shitstorm of hellfire.

The sprint move or as Volition call it, “The Awesome Button,” can now be combined for various flashy moves. Press the attack button when you run up behind someone and you’ll jump and slam their face into the ground. The coolest move though is reserved for a sprinting carjacking manoeuvre where you jump feet first through the windscreen or side window kicking the owner out in one clean sweep. It’s just perfect for nicking cars when you’re trying to make a quick escape. 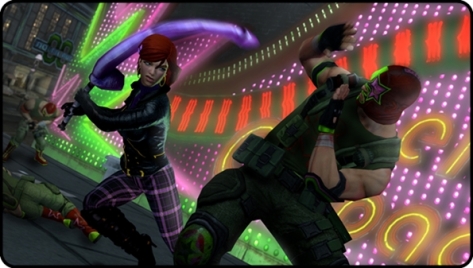 Most of the cars in the demo were standard citizen fare, so nothing exciting really, but the handling is reliable enough, with hand-brake turns easy to pull off. A trip to the local garage/car dealer (called Rim Jobs) allowed us to try out one of the best new vehicles of the year, the Manapult, a truck that allows you to fire pedestrians from cannon after you run them over. There’s nothing quite like taking out a gang at a petrol station by running over half of them and firing them back at the pumps to blow up their mates.

Far from being worried that a lot of Saints Row: The Third felt very familiar, it was great to just have so much fun and see a game enjoy indulging our desires to just mess around in a crazy world. With co-op action set to return too, we can’t wait to play the full game. Put simply, GTAV can take as much time as it wants, we’ll have plenty of fun with the Saints.

Saints Row The Third is released on the PS3 and Xbox 360 November 18th.