A brave mission indeed releasing this PSN first-person-shooter less than a week before Call of Duty: Black Ops. It would have fared much better on PSN a few months back, when it was originally released on XBLA. So does Blacklight have the game to back up this ballsy approach? Well…

The main focus of the game are the online matches. There are a few single player levels but the one-life approach means you’ll only bother until you have a grasp of the controls. You can play them co-operatively but the only way I got this to happen was when trying to get into a deathmatch, it seemed to default to it when there were only two of us in the match lobby.

The game modes on offer are deathmatch, team deathmatch, last man standing (one life eliminator), last team standing, detonate (blow up enemy target), retrieval (capture the flag) and domination, where you get points for holding areas and can briefly lock a station or steal it faster via a quick hacking mini-game.

When the game is running smoothly the matches can be really enjoyable in parts. This is largely thanks to the quick kills and rapid respawning. Players go down satisfyingly quickly with the very solid-feeling assault rifles and SMGs. The snipers are ok, but many of the levels are too boxed in and the killer-cam makes it hard to find a good camping position. The shotguns are terrible though. All aiming can be awkward as there isn’t a separate sensitivity setting for aiming and turning. So if you want to aim quickly down the sights, you have to put up with light-speed turning while you’re moving around.

Using special goggles you can view where other players, health and game objectives are. They can see right through several buildings at once so an apparently nearby player could be behind several impenetrable walls. It’s unlikely you’ll use this tech much because you can’t use your gun at the same time and the changeover is too slow, making you a sitting duck for anyone that chances across you.

Frag grenades come in handy as do the EMP ones that will botch out the screen with a blue computer screen image like a crashing PC. Less useful though and somehow infinitely more ugly than anything else in the game are the digi-grenades that create a dome of pixelation. Step inside and your display fills with error messages as it affects your character’s headset. From the outside it looks like a game turning itself inside out.

There are lots of weapons to unlock for each class, along with a wide range of mods for them like scopes, barrels, grips and camo. Be careful though, some attachments, like the sights, seem to be broken as bullets won’t hit where the cross-hairs are aiming despite the apparently better accuracy rating. There are also a choice of ‘charms’ for your weapons which act as combat enhancements.

You need to keep a sharp eye out to catch the unlock notifications during matches as you’re not told after a match or the next time you visit the armoury when you have some new toys. The game’s presentation for the menus is pretty poor overall. The list of unlockable rewards is awkward to navigate as are most of the customisation screens. The menu’s visual design is rocking the most overused look of recent times: the CCTV effect of lo-res images and bits of random data on the screen. Would every developer out there please just stop it? 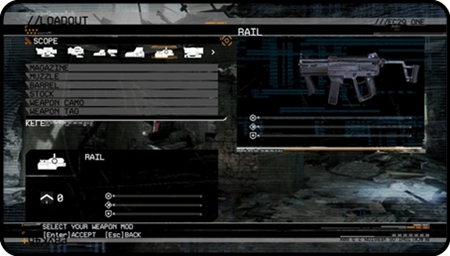 There are 13 maps in the game which is a decent number, but you can’t choose to play at a specific map so you may get stuck with the same handful for a while before the game remembers about the rest.

The locations for the maps are the shooter staples of abandoned cities and industrial areas. Very grey and very seen it all before. There’s also a nasty pixelated effect added every time you respawn, which looks like you’ve just kicked your console in the face as it struggles to load and you jerk into life for the first few seconds on the battlefield. Bad graphical style choice, suddenly mugged by a struggling frame-rate. Not a nice scene.

The action is usually pretty intense throughout as the maps aren’t too big. There are a few areas where the action tends to bottleneck, but at least it’s not boring. It’s all too easy to fall prey to spawn-point campers though in the team based modes where some bases force you through a bottleneck to exit. You don’t even have to fully rematerialise before getting taken out. This happens quite a lot in deathmatches as the spawn-points can’t quite cope with large numbers of players on small maps. Expect a few cheap deaths, but you’ll get your chance too to even things out.

The uninspired menus make checking through your extensive arsenal upgrades a chore and the game never offers up any visually interesting levels. The lag-prone matches are a concern too as you try to avoid embarrassing your bullets by overtaking them. When the game gets it ass into gear, the fast-paced matches can be fun, but for many, this is too crowded a genre for forgiving struggling titles and giving them your time and money.

One thought on “Blacklight: Tango Down (Review)”