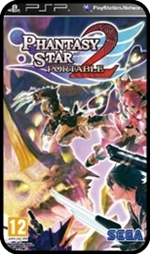 For months I’ve been feeding a slew of PSP Minis into my PSP in a vain quest for something with a little substance. Then September rolls up and throws a new Kingdom Hearts title, Valkyria Chronicles II and now Phantasy Star Portable 2, or PSP2, just to mess with the search engines.

Sega’s long-standing series is more sci-fi orientated than the usual RPG-fare, but there’s plenty of familiarity that is universal to the genre. Don’t be worried if this is your first look at the series, the story is relatively new and doesn’t punish newcomers. For those that did play the last game, it’s now three years later after the Seed were defeated, but guess what, peace never lasts. Good thing too seeing as you’re a freelance mercenary.

Looks wise, the game is a mixed bag, with indoor locations like caves and corridors being as bland as they come. Let the game breath in the outdoors and add a bit of draw distance and the game starts to look a lot better.

Another area the game manages to excel in is improving the on the staple 2D character cut-outs for dialogue scenes. They’re still 2D, but the extra levels of depth added by using a bit of colour shading instead of flat anime colours makes the world of difference. Every now and then you’re treated to an all too brief shiny FMV cutscene too. 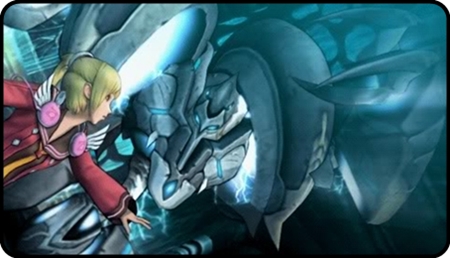 The action takes place in real-time as you control just the one party member, using Square and Triangle to attack. One is for quick attacks and the other for Photon attacks that use up a regenerating energy source. You might start off with a sword for example, but you can hold two weapons at once and swap between them by holding R. Your other weapon could be a gun which you can use for short or powerful charged bursts.

You can have a few other weapon pairings on your Action Palette to change on the fly out in the battlefield. You might have a shield and a wand for example. There are plenty of weapons that have different attributes for you to choose between such as elemental enhancements or damage bonuses. New Photon Arts can be unlocked too allowing you to have different special attacks for each weapon.

What weapons you can use is indicated by choosing your species and discipline at the start of the game. They vary from melee specialist, ranged weapon experts, magic boffins or the bit-of-everything Vanguards. There are pistols, dual pistols, rifles, sabres, clubs, daggers, long swords and more for you to choose from. All of these can be upgraded too to raise their attack powers.

The varied weapon setups are great for fans of the genre who like to spend their time choosing and crafting the ideal tools for themselves. You only need to kit out your character as everyone else will level up themselves, so go ahead and spoil yourself.

The varied enemies you’ll meet means that you will want to swap your loadout on the Action Palette quite often. This is where the game becomes a little unstuck as the game doesn’t pause when you open it. It won’t pause while you select items, such as essential health top-ups, nor will it pause if you want to go into your overall equip/stats menu. So you can’t pause the game at all, not a great design decision for a portable gaming device is it? This may reflect some of the game’s online roots, but when you’re playing single player there’s no excuse, it’s an unnecessary challenge, trying to fiddle with menus while avoiding getting eaten or having to put the PSP into sleep mode for every real-life interruption.

Predictably, the camera tries its level best to ruin the game as it teams up with the absent-minded lock-on system, activated by holding L. The same button swings the camera round behind you rather than automatically turning to face a nearest enemy. This gets particularly annoying for boss fights when they blitz past you and you’re trying to turn the camera around, getting the lock-on to stick, holding R as well to use a gun instead of a sword and then trying to open up as sub-menu to get some much needed health.

The finger-twisting mayhem should have been helped by your AI buddies. At the start of the game you choose a Synth, a small android to help you out in battle. Rather than go for one specialising in specific fighting styles I went for the one that will do a bit of fighting, but whose main aim is to act as a personal medic. Utter bullshit, is how that worked out. So make sure you go for the one with the offensive skills. No matter how many times I used the ‘heal’ command I was always left dipping into my own stash while fending off the hordes. They’re not even selectable for some story missions despite being in the party when you set off. The story characters aren’t much help either, ignoring most commands for anything at all. They’ll only use their healing spells for the group after you’ve just used one of your health items, or when you’re on the other side of the battlefield. It’s absolutely infuriating hearing the “this’ll help” line from miles away and seeing the little green numbers as the rest of the party are getting wasted on meds. It’s a good thing the bastards can actually fight quite well.

If all that wasn’t enough, the game turns out to be bloody hard too. It’s the boss fights that really pull the rug out from under you as the enemies before don’t prepare you at all. Sometimes you may have waltzed through the level, but you just won’t be able to compete with its boss at your current EXP level.

The checkpoints system is a bit borked which really tests your patience. Some levels don’t have any, while others will at least let you restart at the boss fight. Not all of them though. It’s just so inconsistent. On the plus side, any experience points and items you get on the way are yours to keep, so you know that you’re slowly working your way towards being capable at least.

There’s usually a choice of missions you can go for instead of the story one if that’s kicking your ass. Most of these are quite tough too, but once you start to wrestle some co-operation from the lock-on system and you know what’s coming, things do start to gel a bit better. Sometimes, just a new weapon, Photon Art or item can be enough to give you the stones to go back and give that dragon the hiding he’s had coming.

Fans of the original Dreamcast titles will be pleased to see the return of online / local multiplayer. It’s free this time around but at the cost of a central hub. Multiplayer challenges are fun, but only if you manage to get a team you can gel with. It’s code activated too, so you’ll have to be careful about picking up a second hand copy of the game.

The Short Version: If you can get around some of the design flaws there is a deep adventure here, with the weapon customisation impressing the most. Be warned though, this is a tough game that requires a fair bit of grinding and a lot of patience for the lack of checkpoints. You might find yourself wanting to enjoy it more than you actually do.