Well the PlayStation Move games at Birmingham’s Sony’s Beta Rooms have been covered now with Part 1 and Part 2, but don’t worry I didn’t forget about the rest of Sony’s upcoming titles. Today I’ll be going over MotorStorm: Apocalypse, Eat Them and Dead Nation with more to follow soon.

After the varied landscapes of deserts, arctic tundras and the Pacific islands where else can the MotorStorm races go? How about the end of the world? If you watched the recent disaster movie 2012 (ace effects rubbish story) it’s like that insane car escape through LA. The track I got to try out today is being torn apart by an earthquake. The racers are chasing the finish line that is literally being carried by two choppers. I caught a brief glimpse of it before it flew off into the distance and then several vehicles seemed to explode out of a wall and gate-crashing the race. Amongst them was a lorry carrying an oil tanker, perfect.

The streets are littered with people running for their lives and army squads can be seen taking on gangs in the tunnels. Perfect timing for the MotorStorm racers. Skyscrapers are tumbling down all around with windows exploding all over the racers. Some buildings that have already fallen are even used as ramps. The landscape changes throughout this A-B race. Roads suddenly collapse dunking me into underground car-parks and subway tunnels. Higher routes take me right through the middle of an office building. It’s different every time I play it.

Alternate routes are more subtle this time around, once I knew where a road would collapse I would be able to try and hug the left side to stay up-top. The landscape has always been your enemy in MotorStorm, be it rocks, trees or trackside clutter but at least it was stationary. Now you have to avoid whole buildings raining down on you and sections of track just disintegrating. It raises comparisons with the recent Split/Second, but with the chaos out of your control and on a much grander scale that permeates every second of a race. 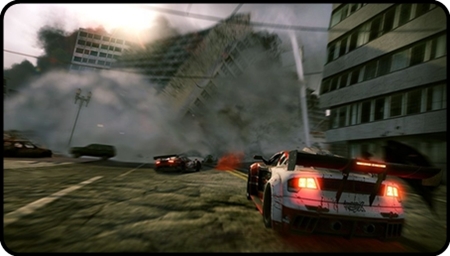 The demo car was a GT/Viper style road beast that probably wouldn’t be my first-choice for racing through the unpredictable terrain of an apocalyptic earthquake. The speed the boost metre zooms up to critical level way too fast for comfort, resulting in quite a few flaming wrecks. Maybe the speed it overheats will vary between vehicles this time, because if they’re all going up this fast, we’re in trouble! There were a few moments were I got stuck being buffeted around, usually in the rounded tunnel section, where you get pushed up the side and the car takes forever to just ‘crash’ already.

This being MotorStorm, it was ferociously difficult; I was relieved to see my fellow journos getting just as battered though. We all had access to this same race and the best I saw anyone manage was a third place finish. Or maybe it was the free beer?

The demo was in pre alpha stage of development so was slightly rough around the edges, but if the previous games are anything to go buy, this should end up being very polished by release. Even at this early stage though you can see the huge ambitions the team have for making the most terrifying MotorStorm yet. If the final game is just as difficult it probably won’t win any new fans but the hardcore ‘Stormers will love it.

The gameplay will be familiar to older gamers who remember King of the Monsters on the Mega-Drive, as you control giant monsters destroying modern cities. This time I controlled a giant green lizard with too many legs and a rocket launcher. The cell-shaded comic book-style graphics look fantastic even with this early build of the game. Unfortunately there’s a lot of graphical slowdown and the controls seems a little sluggish. It was a little difficult to get a grasp on the game as the mode on offer was a simple destruction mode where you destroy buildings. It was a little unfocused, but I imagine putting two players into the mix scrapping against each other for destruction points or in a traditional brawl would be more interesting.

As it is though, it probably shouldn’t have been on show as it was too buggy to be enjoyed. I’ll give it the benefit of the doubt for now and keep my fingers crossed for it to improve.

We’ve seen a few zombie-shooters on PSN in recent years, but this one might have enough to rip through the competition (and then eat their brains). The style is familiar, with the top-down isometric viewpoint, but the graphics are drawn in a more realistic fashion, supported by some atmospheric lighting. The dual-stick controls take care of moving and aiming; other actions include shooting, melee strikes and a powerful running shoulder-charge to break through a crowd when you get cornered. And you will get pinned down quite often as the gunman moves backwards slower than forwards and I constantly had to back away and shoot. A rifle and machine gun were supported by grenades and flares, the latter being fantastic for distracting the undead with their pretty glow, I’m sure I saw one of them trying to eat one too. The machine gun was a bit weak and the rifle too slow (nice laser-targeting though) but I was able to buy some cheap upgrades for damage and rate-of-fire that had a noticeable impact.

The level was broken up by security gates with each area throwing larger hordes of the undead at you. Getting killed had me respawning at a nearby gate or store and never too far away from where I was overcome. It didn’t take long to run back either as areas generally remained clear after wiping out the zombies. Enemy design varied from skinny slumbering types, to zippy sprinters and the fatties that took forever to take down.  No release date has been confirmed yet, but the future inclusion of co-op support might make this an essential PSN purchase.