An asteroid has beat humankind to nuking itself back to the stone age, but the results are pretty much the same. Most people are dead, mainly violent assholes survived, mutants are every- where and the world has become a desert.

You were one of the lucky few who were put into a pod underground to be protected from the blast. Once the dust and fallout settles and everything looks ok, your pod releases you. Ok, so everything’s not exactly great, but as good as it was going to get in the pod’s mind-set anyway.

The main focus is going to be on action without RPG elements. This means that there’ll be no levelling up, but the guns you find will be progressively more powerful the further into the game you get. The best news though is that you’ll have an unlimited inventory system so no fussing over which weapons to keep because of a minor stat difference, keep ‘em all you gun whore. 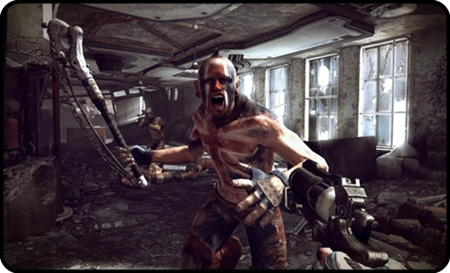 Weapons consist of the usual suspects and a few not so familiar ones. Along with the usual array of rusty shotguns and taped-up AK47s there’s a vicious throwing knife for stealth kills that can take a raider’s head off, mobile gun turrets that buy you some precious time in busy gun fights or you can pack a remote controlled car full of explosives and send it into a room to turn a gathering into mutant pâté. Electric crossbows can be used to your advantage in wet environments, be it in pools of water where enemies are standing, or even at wet enemies near falling water, all are ready for a good zapping. id has said new toys will be introduced during first-time visits to new environments to keep things interesting. The generous inventory system will be welcome here if you’re not keen on a new weapon. It’s so much better than the ‘just two guns and a knife’ approach, there’s nothing worse than having to abandon your favourite weapons.

Graphical detail is looking to be another strong suit for Rage for the game world and its blood-thirsty inhabitants. Environmental textures have all been hand-crafted. What does that mean? Well every rock or mountain surface should be unique. Most games create a few textures then repeat them all over, so if you walk alongside a cliff you’ll see sections of the surface start to repeat, like strips of wallpaper if you will. It’ll be an impressive feat if Rage manages to pull it off, we’d be surprised if some of the devs didn’t sneak in a little bit of copy/paste when nobody was looking though.

Click here to read the rest of my preview at Dealspwn.com

One thought on “Rage (Preview)”