Microsoft managed to pack 90 minutes with some tasty looking games and the newly named Kinect motion control camera. The slimline 360 makes a late appearance too. Here’s the No Sleep Gamer summary of what looked good and a bit of what didn’t.

The Treyarch team have been busy with this one, it looks incredible. The level we’re shown seems to be set in Vietnam, starting in a dark, atmospheric, claustrophobic underground tunnel with some great lighting effects. It then opens up into the stark contrast of a sunlit jungle clearing before seamlessly throwing you into a helicopter to storm a river side base with machine gun and missile fire. It wasn’t clear if the player has full flight control or just control of aiming, we suspect the later. Normal gunplay looks like business as usual (yay!), but the awful ‘jam effect’ returns when you’re getting shot. 360 fans can smug it up too as all COD DLC will be coming to them first each time until 2012. Black Ops looks like a title unafraid to take on Modern Warfare 2, Halo Reach and Killzone 3, good times for shooter fans. 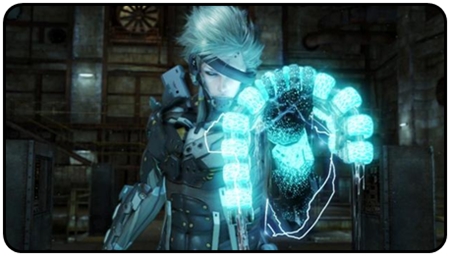 Gaming legend, Hideo Kojima came onstage to say hello and introduce the game’s producer, Shigenobu Matsuyama who in turn explains the game is built around the Japanese term Zan-Datzu which roughly translates as ‘To Cut and To Take’. Rising stars MGS4’s Raiden in ninja form in the action dice em’ up. The brief demo showed he can slice people, vehicles and even buildings with his devastating blade attacks. You’ll also be able to slow down time and choose the exact angle you wish to cut at. The game looks like it’s coming straight out of the MGS4 universe with similar enemy soldiers getting cut in half everywhere in levels similar to the start of that game. It’s too early to say if it’ll be any good, it’s still weird thinking of Metal Gear in a hack n’ slash environment.

The new 4-player co-op in the campaign mode is shown off here as are the new enemy types, the Lambent. They seem to be almost plant like and will be familiar to anyone that’s played Resident Evil 4 or 5 and Dead Space. Human shaped enemies sprout  extra creepy heads Resi-style while the Lambent equivalent of the Bezerker’s have extra limbs that need to be attacked a la Dead Space. Man-sized enemies can now be used as human shields too. The co-op seemed to be played online instead of split-screen and features female troops for the first time in the series. The most notable thing so far though is just how damn good it looks graphically.

Peter Molyneux shows up, talks for a minute or two, seemingly about nothing. Seriously, go watch it and try and remember what he said five minutes later. We were looking forward to a walkthrough demo, but we get a brief compilation video instead. Fable 3 takes place 50 years after F2. Graphics wise, it looks decidedly average, probably not the best choice of game to follow Gears 3 with.

All we know is that Crytek (of Crysis fame) are making it and it’ll probably be a god of war style game. No footage, just some moody actors dressed like TV movie gladiators. A waste of everyone’s time to be honest. It’s annoying enough when devs turn up to E3 with just a CGI video instead of gameplay or demos, but this is just embarrassing.

Single player has slowly improved graphically over the years, but the gameplay has barely changed. Obviously players have more fun with Halo’s multiplayer, but Bungie really need to pull something out of the bag this time. The demo ends with a teasing glimpse of a spacecraft above a planet, that looks like players might get to have a go at a bit of Star Wars-style action. To be honest, Gears 3, COD: Black Ops and Bulletstorm all look a hell of a lot better than this. Are Bungie just working through their notice or what?

That’s new name to replace Natal. Not great, but not awful either seems to be the average opinion of the name-change. It’s good to see companies carrying on like they invented the wheel every time they speak about a new device:

“It is unlike anything you’ve ever experienced before.” Is the rather arrogant statement from Microsoft’s Senior VP of Interactive Entertainment, Don Mattrick. From what I remember, the PS2 EyeToy sold millions. Anyway, it’ll hit North America November 4th with 15 launch titles. Price and European schedule details aren’t quite knuckled down yet.

But hey, the games yes? Not yet, as Microsoft are keen to show off how Kinect can be used to navigate the menus to select music, movies and so on without the need for a controller or remote. Commands are voice-activated with “Xbox…” or “Xbox pause.” You get the drift. A wave of the hand can be used to fast forward a films timeline to find a specific scene. So far, so Minority Report, so what.

Video Kinect: More useful is how you’ll be able to use Kinect as a webcam across Xbox Live and MSN Messenger. No headset required as a camera is built into the device. The camera will even track your movement if you move to the side a little. This seems like a much more practical nongaming use of the tech. There are channels you can activate while chatting to view together too such as news, sports, tv, music and movies. That sounds cool, but will our weedy UK broadband be able to cope anytime soon? Gold members will get free access to the ESPN sports channel; don’t get too excited, we’d imagine it’s for US members only.

Kinectimals: A small child is thrust on stage and goes through a well-choreographed demo pretending to play with an onscreen tiger-cub. The video rarely shows images of her and the screen at the same time, so it’s hard to judge how her actions affect what the tiger does. Milo crossed with Eyepet? NEXT!

Kinect Sports: The kid’s games might be awful, but we can always hope there’ll be a few decent party games. This one’s from Rare, so it could be ok, although the hurdles event looked a bit meh as running on the spot never feels right in these games. The rest of the reel shows football, bowling, table tennis, boxing and volleyball but no footage of anyone actually playing it.

Kinect Joyride: Hold an imaginary steering wheel to steer and thrust your hands forward to boost in this brightly coloured racer. Acceleration seems to be automatic. It looks awful, like watching an adult pretending to steer an imaginary car. The steering seemed to work, albeit at an extremely forgiving and basic level, with minor movements not being picked up at all.

Kinect Adventures: Your avatar is dragged through an obstacle course on a moving platform as you hop, duck and dodge barriers and occasionally pose in a position to collect coins. Two players can compete at once two, making for a possible future hit at parties. The second game shown has players balancing an inflatable raft through rapids and over waterfalls. It’s demoed by two grossly over-enthusiastic women who seem to have the mental age of an eight year old that’s been fed nothing but crack and raw Ribena for a month.

Your Shape: Ubisoft’s fitness game represents you with a blurry silhouette as you go through yoga exercises, block boxing. Urgh that’s enough of that.

Dance Central: Harmonix are cashing on the crap-fest too. It’s a dance-mat game without the dance-mat, looks rubbish, so will probably sell loads as is the tradition.

As the Kinect games demos went on, the polite applause just got quieter and quieter after each one. You could almost feel the resentment coming from the games journo crowd as they all started to think of excuses to give their editors of why they couldn’t review the latest Kinect release. It’s gym class all over again for the poor bastards.

Star Wars (title TBC): Finally, something with gamers in mind. There wasn’t much to show. Supposedly early gameplay footage showed a Jedi taking on storm troopers with the force and light sabre attacks before Darth Vader turns up at the end. This is more like it, but we hope the sabre fights are sped up a lot as they looked really, really slow in the video.

Forza (title TBC): It’ll be here next year and you’ll be able to steer with your hands and look around by turning your head. No word on acceleration control though. If it’s on rails you can forget it.

It’s not been given a slim title, but the new model is now official. It’s 250GB and (finally) has built-in Wi-Fi. It’ll be quieter too as the multiple fans have been replaced by one large one. You’ll need to fork out for a transfer device if you want to bring over data from an old 360 hard-drive which will irritate any converters. The console itself is smaller but not by a lot to be honest. In fairness the old 360 wasn’t exactly overweight like the old fatbox. The price will be the same as the Elite, so probably around £200 for the UK, where it’ll be released next month (score!).

So that was the Microsoft E3 2010 Conference. No real surprises to be honest. Gears 3 looks like it’s going to rock hard as does COD Black Ops. We’ll have to get our hands on MGS Rising before sticking our necks out. Halo Reach seems to be running out of steam compared to the competition, but will probably make up for it with the multiplayer. The late appearances of Star Wars and Forza can’t hide what we all feared about Kinect though; proper gamers (no offence meant to casual players) are getting a shitty deal as shovelware seems to be leading the way. The Adventures and Sports titles may be fun for party games though. At least the new 360 is looking pretty damn hot.

It’s Sony’s turn to show their hand next. We’ll go through their press conference very soon and see how Move shapes up against Kinect.

I have also posted this article at Game Hub.