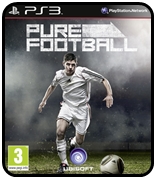 Ubisoft seem to want a piece of the World Cup cash pie, not content with EA having the pitch to themselves. Ok, so this isn’t an official South Africa tie-in, but it’s international teams only and the final ends in South Africa. Coincidence? The hell it is.

Ubisoft are actually ripping off Fifa Street though instead. It’s five-a-side football with outrageous shots and tricks the order of the day. While the last Fifa Street was a bit meh, this is just bollocks.

Unresponsive controls mean it’s easier to score from the half-way line than three feet away. Shooting is controlled with a golf-style swing-metre where you need to nail a sweet spot to ensure it doesn’t balloon over. It’s very random as to whether the goalie makes a wondersave or his elbows get stuck on his hips again as he dives out the way in a way that should get him arrested for match-fixing. If you’ve seen the film Shaolin Soccer, it’s a bit like that at times with some of the belter shots you’ll be piling in. Sadly though, it gets old quick. 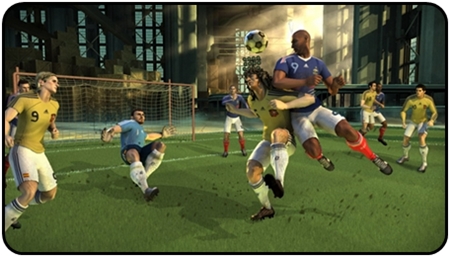 Skill moves are a random waste of time as there don’t seem to be a consistent set of moves assigned to the right analogue stick; it’s just a lucky dip as to what you get. The sprint button may as well be renamed ‘run into defender’ too. There’s a horrible whooshing effect and you can’t change direction.

The game’s graphics are damn ugly and even the replays make good-looking goals look average with poor angles and timing. Likenesses, pitches and presentation all feel rushed.

The one redeeming feature is the campaign mode. Here your new team, with you included, face off against the world’s best teams. You play matches where the aim might be first to score two, be clear by three, or just a normal win as you take a tour around the world. You can steal players for your squad though from defeated teams. Each player has a match requirement, such as 80% pass success rate, take 10 shots and so on before they’ll sign-up. 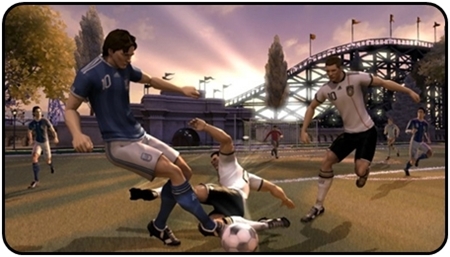 By the end of the game you’ll have changed your squad’s nationalities more times than Real Madrid. Stealing players from other teams is a nice feature, but it’s a bit obsolete when the game is such a pig to play. I was open to something a little more arcade-like than FIFA or PES which makes this even more disappointing. You’ll be better going down to your local Cex Store and peeling a copy of Fifa Street or Red Card of the shelves. If Pure Football was a £10 PSN/XBLA game it would still be £5 too much. As a full retail release it’s shocking. It’s totally baffling that Ubisoft are wasting money on this and reportedly cancelling Beyond Good & Evil 2.