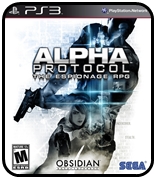 ‘What a difference a few extra months in development makes,’ was what we all thought when Arkham Asylum finally arrived. With an even bigger delay preceding the eventual arrival of Obsidian’s Spy RPG many gamers started to worry about the condition of the nevertheless eagerly awaited title.

The idea of being able to actively affect the story with your own choices in conversations and via your actions had minds swimming with possibilities of combining gameplay styles of the legendary JB trio of James Bond, Jason Bourne and Jack Bauer.

As far as tailoring your own specific spy to your own playing style and having a choice on how you want events to proceed, Obsidian have done very well for the most part. However, the game faces the grim reality of possibly being better remembered for its occasionally unfinished and glitchy graphics and poor gunplay.

At the beginning of the game you choose what sort of spy you want to be: one that relies on sneaking around, a gadget nerd or a typical commando type. You can rearrange your early stats and abilities as you please, with your choice of spy-type only really affecting whether you’ll have access to some of the final abilities.

Let’s get the most annoying stuff out of the way now. We can understand the shooting not being perfect early on, as you’re meant to build up your skills. However, the targeting is woeful even in the later stages of the game. Despite lining a shot up perfectly it will often completely miss a stationary target. You can use blind-fire from behind cover, which actually works better than early aiming. Guns are especially useless at close range with punches being much more effective. Starting as a commando-type agent won’t give you an advantage at all.

Average graphics in the game’s environments are disappointing, but hardly a deal-breaker. It’s the way that some parts of the game’s engine feel abandoned. For instance the interviews with Thornton (that’s you) and the Halbech guy that take place intermittently between big missions have a horrible ghosting effect on them like your TV is about to skitz out. The frame rate chodders a bit too, with the screen breaking up with that familiar horizontal shimmering effect if you move the camera too quickly.

The boss fights are a nightmare too, usually against one guy who needs hundreds of headshots. Aren’t we past these sort of bosses in shooter games? Humans taking this much damage feels a little too ‘90s for today’s tastes. It’s more annoying as stealth is encouraged for the rest of the game, but you’re then forced to battle with the game’s shit gun mechanics.

Despite the above list of horrors, Alpha Protocol may still be worthy of your attention. The customisation can be rewarding, the story is interesting and the character interaction is surprisingly deep, warranting multiple playthroughs.

As a new recruit to the top-secret Alpha Protocol programme you start off hunting terrorists before being forced to go rogue. From here on in it’s up to you how you play things out. Most of your enemies can become allies which will then open up new missions. Or you can execute them and see how short you can make the game! Expect plenty of twists along the way, but not in an overused way à la 24. You can choose which part of the globe to infiltrate too with locations such as Moscow, Rome and Taipei opening up early on.

You’re constantly kept involved with the dialogue usually with three choices of reply varying from suave, aggressive or professional. People will respond differently to a certain approach so first encounters are always interesting as you try and feel them out (not up Mr. Bond). Your hot handler responds well to professionalism first before eventually warming up to your suave (dirty) side. However, Steven Heck responds better to jokes (also under suave options). For example, when you met him he’s trying to pour bleach down a guy’s throat. Suggest a funnel to make things easier and you’re best friends for life. The only downside is the headings for the replies are a little vague at times. Getting the full lines like in Fallout 3 might have been a better approach as you can piss off the wrong people all too quickly if you’re not careful. Buddying up with one person may offend another too.

You will adapt though and try and enhance your reputation with your contacts to make life easier. Truth be told, for my second playthrough I’m going to try and piss everyone off, rather than trying to nail every bit of skirt that gives out instructions/points a gun at me.

If you want to play this like Uncharted or Gears, forget it. Play the game with as much stealth as you can and you may end up having quite a lot fun with it. Sneaking around behind enemies will let you knock them out or kill them, which can also have an effect on your ally’s opinion of you. To get a nice balance you’ll want to upgrade your abilities for stealth, pistols and fighting, with maybe a bit of toughness and gadgets thrown in too.

There are various hacking and lock-picking minigames too. Hacking involves a deranged digital word/number search on a screen filled with numbers or lining up circuits through a maze. Locks are picked with brilliant use of your pad’s squishy shoulder buttons to carefully line up pins.

Abilities can be unlocked as you go, such as weapon-specific Red Dead Redemption style game-pausing to line up shots, or the essential temporary invisibility which works great for stealth kills. There aren’t many abilities, but you can earn stronger versions as you level up.

The game itself becomes more enjoyable over time if you opt for the stealth route; it’s just a shame that things go a bit pear-shaped when you’re forced to shoot your way out of a situation.

The Short Version: Occasionally dodgy graphics and crappy gun battles can be infuriating, but the stealth gameplay makes up for it if you put the effort in. The game really shines with the adaptable missions, conversational input and light RPG character elements.