Bioshock multiplayer probably wasn’t too high up on the list of things we wanted to see included in Bioshock 2 given that it was everything apart from the guns that really made the game (and its sequel) really stand out. Turns out that maybe we should have wanted it all along as it’s turned out very well indeed.

If you’ve heard that the multiplayer takes place before the events of the first game, then you heard correct. However, don’t expect to gain any more particular insight into the fall of Rapture as all it really means is you’ll revisit some familiar locations that have less rubble and destruction than you’ve previously seen. This time though you’re one of the psychotic Splicers.

All modes support up to ten players and can be played over any of the ten maps available. They’re all competitive rather than co-op which is the only place they could have shoe-horned in a bit of plot. Would we want that in the next game, or is Rapture a place to explore on your own? Well let’s have a look at the game modes we do have.

Survival of the Fittest is your basic every-man-for-himself Deathmatch and Civil War is a red vs. blue Team Deathmatch where you aim for the best total of kills against the red team (enemies are always red).

Capture the Sister is obviously a take on Capture the Flag with a Little Sister instead, with you scoring points for delivering her to a wall porthole. When you pick her up you can’t use your guns but Plasmids are still available. You’ll need backup to keep you alive for long though. The Sisters can’t be harmed at all, so enemies will fire at you indiscriminately to get you out of the way.

Turf War is like the team domination modes you might have played before. There are several nodes on the map that need to be captured with points awarded for holding them for periods of time.

Team ADAM Grab is a match involving possession again. This time team members must pick up a Little Sister and stay alive as long as possible, with only their plasmids and teammates to protect them. The winning team is the one that racks up enough time carrying the child. This mode is much more fun than Turf War as the possession game is much more mobile and results in less static siege situations and getting shot in the back trying to take over a station. 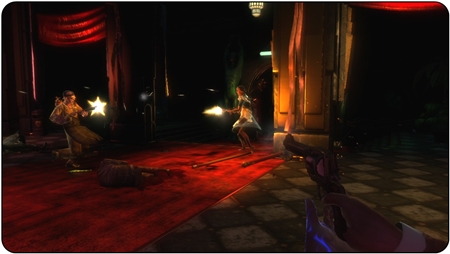 These modes also occasionally drop in a Bid Daddy suit for anyone to grab. Excitingly you instantly feel more powerful with this one than in the one you play in the single player game. The Rivet gun is deadlier, you’re taller, you can throw out proximity mines and perform a stomp move. No drill then, but you do have a huge amount of health and can really take some names before they bring you down.

Turrets play a large part in multiplayer with players able to hack them by holding down X to fill a progress bar, instead of a mini-game. You can’t re-position them but you can hack enemy ones to attack them on site instead which is always useful and bags you some extra points.

Research photos have returned in a simpler guise, just hold X over a corpse, like in hacking, and you’ll gain a damage bonus over that player until they kill you. Hacking and research can be sped up with Tonics which can help.

The Tonics and Plasmids are what keep the multiplayer fresh here, with a wide variety on offer and plenty to unlock every few levels. There’re only two Plasmid slots available so you don’t have to worry about dragging up the radial menu all the time. Plasmids include the usual Electro Bolt, Incinerate, and Winter Blast early on with Telekinesis, Geyser Traps and Swarms later on.

Tonics act like perks giving you faster recovery, better hacking, better melee and so on. You’ll eventually unlock three slots for them so you’re given a nice range of choice.

Levelling up also unlocks new weapons and abilities for them, like automatic firing for the pistol at the cost of firing speed (umm, so what’s the point?). You start off with a pistol and shotgun, but can look forward to machine guns, grenade launchers and more. There are even kill milestones to hit for each weapon and similar targets for Plasmid use that constantly pop up for each kill during the match rather than just burying them in the menus.

Players can set up three loadouts that can be swapped between mid-match to prepare a decent range of plasmids and weapons. The control set-up can be altered too, so sticking fine aiming to L1 instead of R3 work’s better for the faster nature of online play.

Aiming feels solid enough and lag is kept to a minimum, thanks to a sensible ten player match limit. Plasmids seem to work just as well as they do in the single player game with pools of oil and water often proving to be just as deadly as the guns. Matches feel fresh each time as players on teams are shuffled after each round to keep teams balanced.

With the ten decent sized maps available here and the plasmids, tonics and other unlockables providing a steady stream of targets to reach, Bioshock 2’s multiplayer is a success and well worth a look once you’ve completed the main game. Future DLC is planned too, possibly involving extra maps or extra single player challenges.