James Bond, The Bourne Trilogy, and 24: all great viewing, brimming with gaming potential but they’ve never quite replicated the same excitement and intensity in gaming form. None of them really made you feel like one of the starring JBs. Bond’s Quantum of Solace was a decent shooter with some nice cover-based gunplay but never really felt like a Bond movie. Bourne’s effort was basically a long line of QTEs with some ropey gunplay and 24 tried to do too much and resulted in an average Jack (Bauer) of all trades and master of none.

Enter Alpha Protocol and CIA agent Michael Thornton. This time you’ll be able to decide what sort of spy you want to be as well as deciding how you want to play the game. As developers Obsidian keep saying, “Your weapon is choice.” Elements of stealth, action and character interaction will all be available and will have an impact on what sort of game Alpha Protocol will be for you. 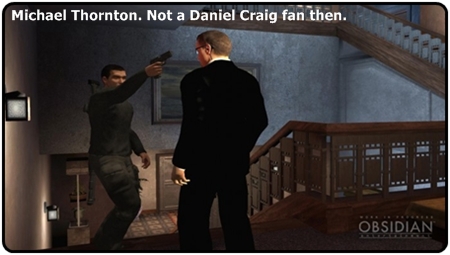 The game utilises a third-person viewpoint with the camera going over your shoulder when you get involved in shootouts like in Metal Gear Solid 4 and Gears of War. This should work better than a first-person view as it will help to keep you more aware of your surroundings and be more helpful for hiding or aiming from behind cover, which we imagine you’ll be doing a lot of.

Customisation of your spy will ensure that you can play the game in different styles, instantly adding to its replayability value. If you want to try and be a sneaky devil you can try and be as covert as possible. Or you can take the silencers off and go in loud and proud with automatic weapons and shotguns and make sure they know damn well you’ve arrived. Or you can get all Jason Bourne on them wearing an unassuming ‘walking in the park on a Sunday jumper’ and take them on with unmatchable martial arts. One question remains though. Will you be able to mix and match these styles later in the game or will you have to pick one and stick with it? Hopefully the former.

A lot of the customisation will be bought with AP (Action Points) that will be earned throughout the game. You’ll be able to upgrade stats for stealth, pistols, submachine guns, shotguns, assault rifles, sabotage, technical aptitude, toughness and marital arts.

While unlocking various tiers of the above and probably many more areas in the final game you’ll occasionally unlock Fallout 3 style perks. These include helpers like quicker aiming for critical hits or the time on your multiplier meter decreasing at a slower rate, improving your chances on keeping your combo going. We’ll presume that last one isn’t really something for you budding stealth types. There are also unlockable skills such as a time-freezing option that lets you line up a few free shots like we saw in Call of Juarez: Bound in Blood or Fallout 3. If you want a more hands-on attack there’s a sort of ‘fury’ option where Thornton howls at the sky (very Wolverine) and smacks the hell out of everyone in a seemingly temporarily invulnerable, hyper-strengthened state. Hopefully both quiet and loud playing styles will be catered for with the same levels of depth and customisation choice.

The level of modification for the weapons looks like it won’t disappoint. Using the internet store at one of your many exotic safe houses across the globe (like any self-respecting super spy has) you can buy various silencers, lighter gun barrels, bigger ammo clips, targeting sights and grips amongst others extras. These will have an effect on your weapons damage, recoil, accuracy, ammo and stability. You also have four slots for body armour modification. It’s all these little stat tweaks that have allowed Obsidian to claim this to be a spy-RPG and why not? Already it seems to be like choosing weapons and armour in a JRPG by weighing up the pros and cons of each item.

You can change the clothes you wear and add hats, beards and sunglasses. But what about changing the actual face of Thornton? All footage shows the same face for him so far, but you can keep your fingers crossed to be able to create the smug charm of Pierce Brosnan or the forehead and jaw of a Matt Damon.

Elements of the story are open to change too. When talking to characters you will be able to choose how to respond. Will you try and befriend them, coaxing out little bits of information at a time and possibly forming an alliance? Or will you go for slamming their head into the bar until they squeal and possibly burn your bridges? It will be interesting to see how much depth there is to this part of the game and how much it can affect future allies, enemies, mission opportunities and even the final outcome as Obsidian have already mentioned there will be numerous endings.

One interesting bit of trivia you might be interested in is that Nolan North, the voice behind Drake of Uncharted and the Prince of Prince of Persia (2008) has a role. It’s not your character though so don’t expect any wisecrack talking options as you’re probably going to be very straight laced. Here’s hoping that North’s character, Steven Heck, is given some decent lines worthy of gaming’s number one voice actor.

It might even be down to the bound-to-be-huge-at-Christmas games like Uncharted 2 and Modern Warfare 2 that Alpha Protocol has apparently been put back to at least spring next year. That and the controversy ignited after the minutes of a Sony / Sega meeting were leaked suggesting the game wasn’t quite ready for its original October release (one guy’s opinion at said meeting by the way). What’s the deal with Sony and leaks lately? Sort it out guys.

Well if we have to wait a bit longer for Alpha Protocol, then so be it as we don’t need another rush job like Wet. This looks to be an immensely promising title that should provide an RPG style depth to the third person action genre that will be worth waiting for. Jason Bourne for the win all the way in case you haven’t decided which JB to be yet.

*I originally posted this article at Hooked Gamers.