New York, New York. The city so nice they named it twice. Except poor old Max Payne doesn’t seem to agree if these screenshots are anything to go by.

After the moderate success of the recent movie which used New York for some great noir elements it’s surprising to see Rockstar ditch the Big Apple for this sunny, possibly South American setting.

It would seem that his whole image seems to have dried up in the sun too. Former NYPD detective Max now looks like a mix of John McClane from Die Hard and an escaped convict.

The game itself could turn out ok, but it currently doesn’t resemble the previous games noir vibe. The forums and comments page have already started to note how it has more in common with Stranglehold and Uncharted. 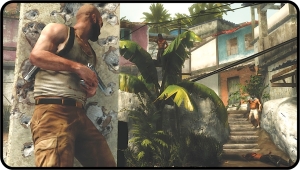 However, these could just be shots from one level that might be an odd-one-out amongst more suitably darker ones. The visuals and settings may be radically different, but it’s a safe bet that bullet time will be making numerous appearances. It’ll be interesting to see how the name that started slow-motion gun battles for games will try and take back its crown.