The PS2 was spoilt for choice with platforming adventure titles, Ratchet & Clank, Sly Cooper and of course Jak & Daxter. So an excuse to dive in again in shiny HD with widescreen support was a no-brainer.

Jak & Daxter: The Precursor Legacy is admittedly one of my favourite games, but have I been remembering the game through rose-tinted glasses, was it really that good? Hell yes it was. Originally released in 2001, this was ridiculously impressive both technically and in terms of gameplay. All the levels are linked together, and you can run from one end of the game to the other without a single loading screen.

This original game was the purest of the three with a heavy focus on platforming. Jak’s movement skills are second to none. In addition to a standard double-jump, he can do a spin attack in the air that acts a brief hover to slow down your landing. Better still is the rolling jump where you spring forwards a longer distance than a regular jump. There’s a great risk/reward factor as if mistimed you’ll roll off the edge. Astonishingly, this move was removed from the fourth game released a few years ago on PS2/PSP, and it stank accordingly. 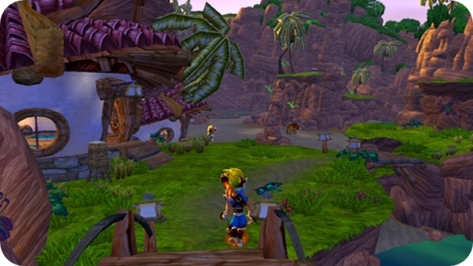 Jak 1 is packed with missions like clearing enemies, looking for lost pets, fishing, exploring jungles, temples, mountain passes and more. What makes it so moreish is the wealth of collectibles. Powercells are rewarded for missions or intense exploring, while the numerous Precursor Orbs (aka the Strange Relics from the Uncharted games) are littered around both in the open and hidden away. With helpful menus showing you what you’ve not yet found in each area, you’ve no excuse not have a crack at hoovering up everything.

Each of these games has a Platinum trophy and I bagged the first one in one day. One epic eight-hour day of gaming bliss. Jak might be a mute character here but his sidekick Daxter provides enough laughs to keep things going along at a nice pace. With multiple objectives to attempt at any time, the gameplay always feels fresh.

It not quite the perfect game though, restart checkpoints are often staggeringly absent, often dumping you back at the start of a stage. There are a few moments where Jak won’t grab a ledge and will just slide down as if he’s hit an invisible barrier. It was the same on the PS2; particularly jumping onto one of the spinning blocks in the Citadel. Old wounds and all that. The hover bike isn’t a big part of the game, but it handles terribly and will test the patience of new players. Oh well, at least it wasn’t a huge part of the game. That would be stupid…

Which brings us Jak II: Renegade. This is where it all went wrong as the series decided to imitate everyone else instead of following its own excellent example. The new location is Haven City, the greyest, most miserable piece of lazy-arse game design you’ll ever see. Thanks GTAIII. Brilliantly, Naughty Dog took the terrible hover bike model from the previous game and forced us to use similar vehicles as the main mode of transport around the city. They handle more like boats than anything else, add in merciless time limits and you can expect to despise them even more. The streets are very narrow and packed with the all too easy to piss off Crimson Guard. With every mission requiring an arduous drive across the city with the aid of a useless on-screen map it wasn’t long before the memories of the awesome first game were falling away. You do get to leave the city, but mostly for dank sewers and caves instead of the lush environs of the first game.

Things get worse as Jak now talks and was a trailblazer in the trend for lead characters turning into angry/emo dickheads (see also Prince of Persia: Warrior Within). In sight of the success of Ratchet & Clank, guns where chucked into the mix for the first time. Compared to Insomniac’s boomsticks, Jak’s were hard work to aim and lacked punch and originality.

With a darker story than the original there’s an interesting plot buried beneath the awful design of the game, but nothing that you won’t get less painfully from a Wiki site. The first game stands alone, but the plots of the sequels are linked.

Jak 3 fares better by taking you out of the city (for a while at least), swapping it for the desert wastelands and dune buggies. The buggies are an improvement over Haven’s rides, but there’s still an over-reliance on travelling back and forth to the same locations. The pacing of the story fares much better than Jak II though and even the checkpoints feel fairer. It’s worth noting that Amy Hennig (a lead writer/director of Uncharted 2 & 3) joined Naughty Dog for this game and you can see her influence early on as the game feels much tighter than the previous one. Both sequels lack the sense of fun the collectibles offered though as they’re much more sparse.

The visuals of this collection are of a decent standard, but there’s not particularly a large leap in quality, mainly due to the original games being good looking anyway. Edges have been smoothed over and there are no signs of screen tearing, pop-in or frame-rate issues like we’ve seen in some HD collections.

The Short Version: Jak II is the stinky middle of this collection, but there’s no denying the ever-awesome original Jak & Daxter. Any platformer fan needs to play that game. Jak 3 fares better than Jak II, but it still goes to show that some severe changes are in order if Jak & Daxter are ever to make a comeback, mainly not copying everyone else and going back to their roots.