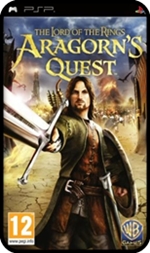 The take on this familiar tale is that of Samwise Gamgee retelling the story to his children from the fireside’s warmth back in the Shire, focussing solely on Aragorn’s adventures. Naturally he’s added a few extra details here and there to keep things interesting.

Which is actually a quite decent excuse for a few elements that are out of sync with the film, such as spiders in Moria, a Balrog chase scene, fights with Wildmen in Rohan or having to fight your way out of a goblin infested cave on the way to Weathertop.

There’s nothing so different as to upset the fans. Although, apart from a few lines of text from the rest of the fellowship, you’re on your own. Aragorn is saving Middle Earth on his own, in a similar way to the US saving the world in every WWII film/game then. No Legolas is always a good thing though, right?

Sean Astin (Sam) is the only top name voice talent attached to the game for his narration between levels. Music from Howard Shore’s original score is included which is obviously a plus point. Unfortunately the game uses the same parts over and over again. You’ll be sick of the Shire theme by about mission four. The music tracks themselves are often quite short; after building up in scale they will suddenly stop and restart at the quiet beginning. This will happen several times over the course of a level and is really irritating after a while. 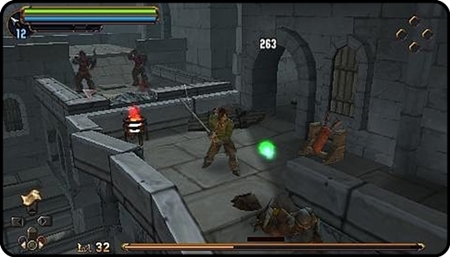 The game wisely opts for a top-down isometric viewpoint, similar to games like Diablo,Killzone: Liberation or Lara Croft and the Guardian of Light. This means there’s no need to worry about having to move the camera around with the non-existent second analogue stick. Hats off to TT Fusion for making the decision that most developers overlook.

The 17 levels are all fairly similar in gameplay terms with lots of enemies to kill and the occasional lever to pull or winch handle to find. Each level is a decent size, with most of them averaging around 25 minutes to complete. To keep things interesting, there are hidden objects to find or Dwarf runes to unlock chambers where new equipment can be forged. There are an awful lot of crates to smash, although 95% of them are empty, but you know how it is: you see a crate, it has to be destroyed, there’s no way around it.

Enemies vary from orcs, goblins, Uruk-Hai, Wildmen, archers, spiders, wolves, wargs, undead soldiers, trolls and Nazgul. Most of which can be defeated by the same combos. Armoured or shielded foes may require a strong combo to open them up. Or you can opt for a more skilful approach by attempting to parry their attacks and countering while they’re staggered. Enemy Captains heal their troops so it’s always a good idea to take them out first.

Combos are made up of normal and strong attacks (yes with the square and triangle buttons, how’d you guess?). You can unlock extra abilities to fight with in the form of special moves, extra damage, healing and enhancements to your arrow attacks. These are unlocked with points awarded for levelling up and the abilities themselves are powered by a Morale bar which regenerates whenever you slap anything ugly with your sword. In fairness the game is probably aimed at a young crowd which may explain the simplicity of the combat. Lord of the Rings fans of all ages can enjoy this game though, albeit in small doses to counter the repetition.

While the graphics aren’t exactly going to be stealing any awards from God of War, they nicely represent famous scenes from the films. Moria, Helm’s Deep, Rohan, Minas Tirith and The Black Gates are amongst the key locations.

Cutscenes are almost non-existent apart from the fireside reading in the Shire. The rest of the story is illustrated with still images from Sam’s book. To be fair we all know the films inside out by now, so perhaps the lackadaisical attitude to this side of the presentation can be forgiven. Plus TT Fusion’s budget probably wasn’t in the same league as as the Ii or PS3 versions. Either way this is a better effort than most licensed games.

The Short Version: The choice of an isometric viewpoint overcomes the lack of a second analogue stick which cripples the camera on so many action titles on the PSP. The gameplay might be repetitive, but the journey through the movie locations has a consistent flow to it that keeps you going for ‘one more level’ long after your hands start to lock-up.